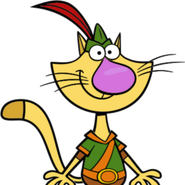 Nature Cat, (also known as Fred) is one of the four main protagonists of the PBS Kids original series Nature Cat, along with Daisy, Hal, and Squeeks. In the absence of his owners, Fred transforms into his alter-ego Nature Cat, narrating himself as such throughout the show. He is the main protagonist in leading a group of three other animals, frequently using the expressions "Tally-Ho!" and "Onward and Yonward!" when initiating and continuing his adventures, lending to his optimistic and cheerful attitude in encouraging enthusiasm for the natural world. Taran Killam appraises Nature Cat as a positive character for children, describing his handling of adversity as “A great example of when you fall down you get back right up… and try it again”. He will occasionally drop from his ‘Nature Cat’ persona where, much like a regular house cat, he can suddenly become nervous or frightened. This can include having to interact with water, lamenting “Why does it always have to be water?”, but in these situations, he ultimately ends up finding the confidence to persist.

In the episode Call It A Night, he remembers the time that his hat has been with him since he was a kitten. and in The Return Of Bad Dog Bart, he brings an emotional flashback when the family's toys had been stolen and Gwendolyn had to leave to find Bad Dog Bart to find her family's toys.

He is a pale yellow cat with an over-sized head and a lavender nose. He wears a green hat on his head with a red feather attached to it, and a green shirt with orange lines and brown sleeves, and a thick orange line going across it, making it look like he's wearing a sash, and an orange belt on his waist, brown pants, and light red shoes. Under his red shoes, are his ticklish feet which have four toes.

As a kitten, his fur color is darker, his hat is small, his nose is bigger, he wears a lighter shirt with the red line and wears brown pants and pink cheeks, and his shoes are a darker color. He also speaks with a lisp.

In A Nature Carol, for pajamas, he wears a green long sleeve nightgown, a green nightcap, and light brown/orange slippers on his feet. He was also was once a plant, as shown in the gallery. 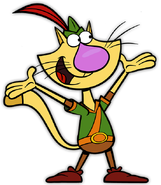 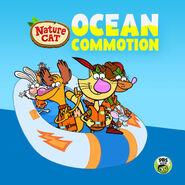 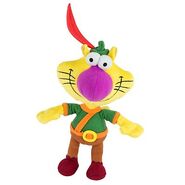 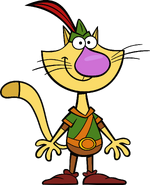 Add a photo to this gallery
Retrieved from "https://nature-cat.fandom.com/wiki/Nature_Cat_(character)?oldid=7678"
Community content is available under CC-BY-SA unless otherwise noted.